I’m studying for mid-terms, getting ready for eight days of vacation, working with a designer on a new book cover, and feeling a bit stretched.

When I searched for a book cover designer, I thought: “All I need to do is hire the right book designer and then book sales will take off.”

Even as I write this, I now realize that I was looking for a unicorn book cover designer.

In my mind, this person would…
1. Have a portfolio which proved they were great at designing books.
2. Have worked on books I’d heard of, or at least books that sold well.
3. Have a “great design sense” that matched the style I was imagining.
4. Take my project and run with it (with minimal input), allowing me to focus on other things.
5. Know everything that’s needed to 10x my sales.  After all, that’s what a cover is for!

Of course, we both know that unicorns don’t exist.

But good book cover designers do, just like front-end developers, API developers, DevOps engineers, and all the other specialties you’re looking for.

So many mistakes flow from a simple thing like having the wrong mindset about hiring someone.  And woe to the designer who I choose, because there’s no way anyone can live up to my expectations.  In fact, I see in myself (and other managers) a pattern that looks like the Gartner Technology Hype Cycle.

The pattern I’ve seen is:
1. After you hire someone, especially someone you think is a unicorn, you quickly rise to the Peak of Inflated Expectations.
2. But all too quickly, things aren’t working quite like you hoped.  Suddenly you’re sliding down the Tough of Disillusionment.  At the lowest point, you may feel you made a mistake hiring them.
3. Over time, trust and rapport build and you see the good and bad.  Hopefully, you realize that coaching and feedback are necessary (even with a unicorn developer!) and you move up the Slope of Enlightenment.
4. With time you build trust, set realistic expectations, and end up at a Plateau of Productivity. 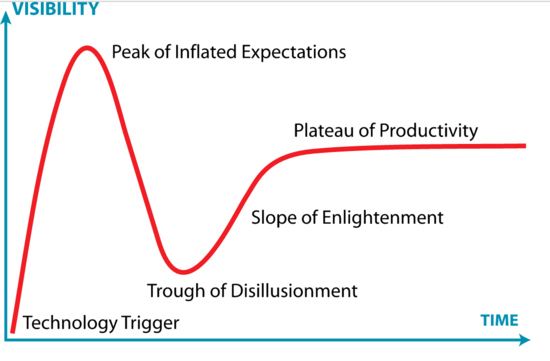 .
(Taken from the Wikipedia article.)

As Jane told me, “When I hire someone they seem brilliant, but two months later they have transformed into an idiot. Weird.”
Apparently, the problem lies with Jane.  And me.  And who knows, maybe you too.

So…
Does this resonate with you?  Have you experienced this “hype cycle” in your hiring?
Are you making the mistake of thinking a unicorn will solve all your problems?

If so, stay tuned.  We’ll talk about this more next week, and what you can do about it.